Over the weekend Of June 28th and 29th I represented Garage Racing in the National Track Calendar event at Hellyer Velodrome in San Jose, California.  The event consisted of two days of national level racing in Sprint and Endurance Track racing.  I decided to test my skills against the best to west coast had to offer in the world of Endurance Track Racing.

Hellyer is a 335 meter long track with 23 degrees of banking in the turns.  It is quite a unique track with such shallow turns for its length; but nowhere near as radical as tracks Like Alpenrose or Burnaby. 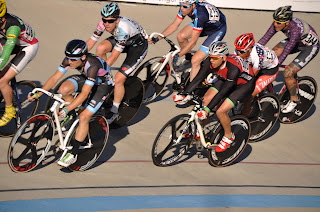 The race started out very slow except for one guy who was given a huge leash.  I never go for the first sprint, but I found myself in perfect position so I went for it.  I took second to the guy who was now 1/2 a lap up and got myself onto the point board.  Ended up sitting in for the next sprint as that took more out of me than I thought it would.   The solo guy lapped us (gaining 20 points) as we came into sprint number 3.  I was able to pick up 4th in that sprint adding another point to my total.  Then Zak Kovalcik (National Omnium Champion) attacked and the field shattered.  I was gassed from the sprint and could not follow.  I got caught in no-man’s-land solo as Kovalcik and a few others made contact to the back of the main field, lapping them.  After at least 10 laps solo, Five guys caught me and we made it back onto the main field (consisting of the break and a bunch of guys now a lap down) with 12 to go.  The pace was insane.  I could hear the Announcer yelling out splits of 34 and 35 miles per hour.  My legs were a blur.  IT was all I could do to maintain contact to the lead pack.  Attacking and sprinting for points was the last thing on my mind.  My 4 points that I earned early on were only good for 11th place. 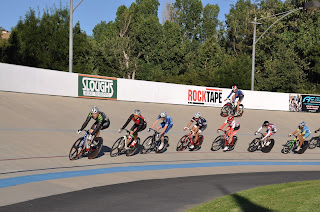 I had pushed a very hard gear in the points race and had a hard time accelerating it when the jumps went so I geared down for this one.  The race went hard from the gun, we were strung out in a pace line and I could hardly get that little gear turning fast enough to hang on.  There were 3 premes: 2x$50 and a $20.  At 25 to go they rang the bell and I was right at the front of the pace line with a guy 1/3 of a lap up.  Everyone pulled up track and I was left solo in the lane.  I figured it was as good a time as any to get away since I would have a partner.  So I attacked caught the guy right after the line and we started trading pulls but we were only 1/4 lap up on the field.  We kept it up but he was not pulling as hard as I was we could not get into a 1/2 lap rhythm.  They rang the bell for a $50 preme and I took off; had no problem accelerating the smaller gear and ended up $50 richer for the effort.  At this point the pack got restless and Kovalcik tried to bridge, the pack responded and we got caught with 16 to go.  Kenny Williams yelled at me as we got caught to stay up front so I gave it a dig and only floated back a few wheels.  As we came around with 14 to go I heard a bang behind me and I realized why Kenny said to stay up front; there was a massive pileup and then ended up having to call the race.

To make up for the 30 lap scratch race being stopped they decided to run a 20 lap scratch the next day.  It started out fast but not aggressive. Nobody attacked; we were in a single file paceline taking half lap pulls.  The pace was too quick for me to attempt an attack, it would go nowhere. With 4 laps to go, the pace increased even further.  With 2 to go I was 5 wheels back in the second column from the bottom. Two guys pulled off together and lingered mid track, I had to go over them.  When I got back down I was about 10th wheel back.  This was too much ground to make up and I missed the move; I ended up 9th.  I spent too much time taking pulls at the front trying to make sure I was there if a move went. Had I been able to shoot the gap between the two guys I would have made top 5. This race, though it was short, taught me a lot about how to position and how important it is to be ready for anything.

Win n out: 20 laps then 3 pull laps where the winner of each lap is awarded the next placing. 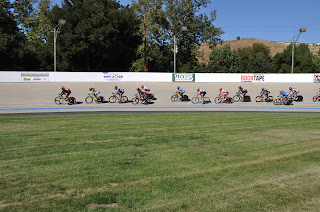 It was just a fast pace line.  I never made it further than 4 wheels back trying to stay to the front incase an attack went off.  This ended up being my downfall as no attack ever came and with about 4 laps to go the pace quickened and the guys who had been sitting in and were still fresh brought the pace up to the high 30’s.  I was able to hang on for 6th place but the amount of work I did in the being at that pace just cooked me.

Miss n out: Every lap the last guy across the line is out.

Only 9 guys lined up in the 104 degree heat of the afternoon sun.  I did not know what to expect from a field of that size in a miss-n-out.  I did what I try to do every miss-n-out and went straight to the front a drilled it.  I was the first guy across for lap 1.  I felt pretty safe but was going pretty hard. As we came around for the second lap I saw the wave start to come over top and figured I would be fine.  I would jump into the line and roll through.  The announcer was very excited in saying “Here comes the wave over the top at 38 mph.” A little too quick, somehow I went form first wheel to out in the second lap.

This was a wonderful experience racing at this caliber and will do wonders for getting me ready for nationals this year.  It has shown me just what I am up against and what speeds and tactics to expect at a national level even.  I would sincerely like to thank Garage Racing for helping out financially to help realize my goals of being a competitive force on the national calendar this year.