To the Future Owner of 329 Summers Circle 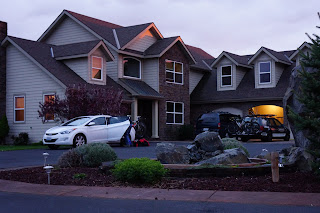 First, ample parking.  The property just has way more parking than we could make use of.  Jason Bethel attempted to take up as much parking space as he could in this photo.  He even opened his car door and stood (hidden) in the driveway to take up more space.  Yet there was still adequate room for the rest of the gang to park.  Amazing. 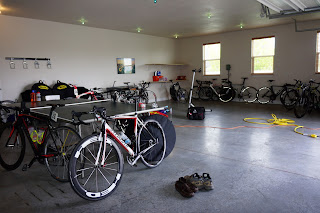 Arguably second after car parking is bike parking.   And whoa, did 329 Summers Circle impress. A three car garage gave us real estate galore to park bikes.  You'll notice no double parked bikes in the photo at left!  You'll visually notice the security of the garage, and our bikes, was significantly increased by leaving some strategically placed stinky shoes.  Be glad it's a photo only.  Future owner of 329 Summers Circle, please contact Kevin Masterson to obtain a custom set of stinky shoes. 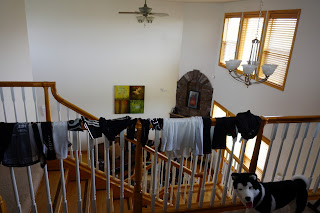 As important as bike parking is chamois parking.  With only two floors one would think banister space is at a premium.  Not at 329 Summers Circle.  The picture at right only displays the beginnings of creative thinking for airing out race clothing.  Modern lycra just wants to breath, and 329 Summers Circle delivers with a massive amount of linear footage for hanging said lycra.  Joe Baum's clothes may serve as an even better security system than the shoes in the garage. 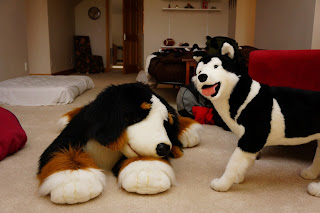 The best thing about coming home from a race up and down the roads of Waitsburg is a smile from man's best friend.  And 329 Summers Circle is smile friendly and dog friendly.  "Duke" and "Buddy" were put work in the feed zone at Sunday's Kellogg Hollow Road Race.  Sean Philips attributed his 2nd place finish to the St.Bernard style-brandy barrel Duke provided in the feed zone as Buddy went Cujo on the rest of the pack. 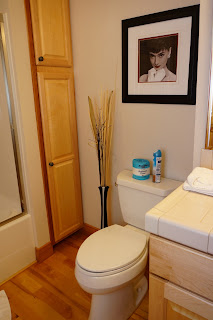 And where would a house full of guys be without mom to look over them?  The watchful eye of Katharine Hepburn at 329 Summers Circle is ever present as one takes care of business at one of four of the bathrooms.  The future owners of 329 Summers Circle will very much appreciate her attentive eye on their every "move",