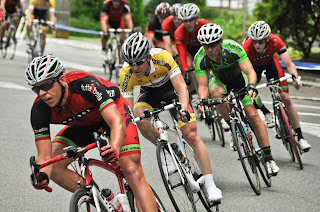 Friday began the stage race with the 72 mile Capitol Forest Road Race with John, Zach, Qayam, and Kyle at the line with the 1-2's.  John Sindell made the selection for the break of the day, working with four other riders to start the weekend with minutes on the rest of the field.  John finished over two minutes up on the pack and in fourth overall after stage one with Zach covering late attacks in the field.

Stage two was a short 3.6 mile time trial on Deschutes Parkway in Olympia.  Kyle Farrell pulled fourth on the stage, finishing 26 seconds behind race leader Ian McKissick (Audi).  Let's skip over stage three; the crit was our greatest miss of the weekend with a field split putting John & Zach down in time and Kyle missing all the time bonuses.  doh!

Stage four, the 90 mile Queen Stage, got Kyle Farrell in the early break with four other riders.  The break amassed over 11 minutes on the field by the halfway point at Elma.  Logan Owen (HB) attacked the group on one of the return climbs and was not seen again.  The remainder of the break rolled across the line still 5 minutes ahead of the next finishers, securing Garage's fourth in GC.

Tough weekend with many local teams bringing out their A-game.  Garage Racing is looking forward to the upcoming July crits!