I didn't expect much from Olympic View.  It's a fun course, but adding an extra lap on top of last year's race combined with the race being a state championship event were sure to make things hard.  With 8 guys in the field, we needed to make sure Garage was in every break.  I think we planning on having someone try to go in early breaks while either Zach or I rested for later attacks, but I forget things as soon as the race starts...

After my typical "start at the back" move, I decided things were going a bit slow and moved up the right side to hang out with the guys up front.  I went in an early attack right as a big crash happened near the middle of the field.  Tubbs bridged up to the break and told us to neutralize since most of the race had either crashed or gotten stuck behind the crash.  We rode slow for 5-10 minutes until folks started saying it was time to race, so I took off solo.  Carson Miller bridged up to me like a freaking rocket, and I swapped a few pulls with him hoping like hell that some other folks would join in since I knew I could hang with him for 100 miles at his pace.  It seems as though Carson was poison to any break, though - we were chased down before we could build a gap larger than ~20 seconds.

Soon after, Jamie Stangeland attacked and rode solo for a few laps.  Nothing much really happened in the field during this time.  I took a couple of turns at the front to keep from being too bored.  Folks would try to go off the front now and then and get shut down pretty quickly.  Oh, it also started raining at some point - mostly just on the back side of the course.  The pack eventually brought Jamie back with about 3 (4?) laps to go.

Breaks formed and were chased down for the next half a lap.  Folks would react very quickly to any break that Carson or Stanko joined, so nothing really got anywhere.  Suddenly, Kyle and I watched (from way back in the field) as a group of 6 guys slowly rolled off the front while the Garage guys near the front mumbled something about "defence winning championships".  Okay, maybe not, but we let a break get away.

After chasing for several miles, we weren't really making time on the break.  I moved out of the rotation for a bit to rest and pout.  That's when Steve Wilssens pulls up next to me and says, "you wanna try to bridge?"  He took off before I could finish saying "sure", and I jumped on his wheel.  Here we go!  We got clear of the field, and I killed myself pulling about half as long on my turns as Wilssens would pull.  I was pretty sure I was destined to get dropped as soon as we made it to the break, but maybe folks wouldn't pick up the pace when two new riders arrived...

We made it up to the break before the feed zone and sat on the back to rest.  When we told the rider at the rear (TH) that we were going to skip a few pulls to recover, I was (not very) surprised to hear, "Fine with me!  I'm just sitting on, too!".  Great, it's going to be one of those days...

As we neared the finish line, the lead car began to slow and then came to a stop.  I then remembered that our follow car had told us that there was an ambulance at the finish line (crash in the masters race), but the guys in the break hadn't gotten that memo.  The lead car said we were stopping, so a few of us took the opportunity to have a bio break.

Our break was given a head start (50 seconds, I think) when the race restarted for the final lap.  We all worked pretty hard to keep the gap going.  About halfway through the lap, we were told there was a chase group of 6 about 50 seconds back with the field another 30 behind them.  Then the lead car began to slow again.  Are you kidding me???  We had 10 more miles to go, and they were stopping the race AGAIN.  It turns out there was another crash requiring an ambulance at the finish line (cat 3 field).  This stop lasted much longer (20 minutes or so).

We all got really cold standing around, and everyone starting making "bad sprint excuses" by talking about how tired they were or how bad they were cramping.  We all agreed that priority #1 is to not require another ambulance appearance.  Our follow car let us know that the chase group was actually 4 guys, but they wouldn't give us any more recon.  Anyways, we got going again eventually and got back to a pretty normal rotation. 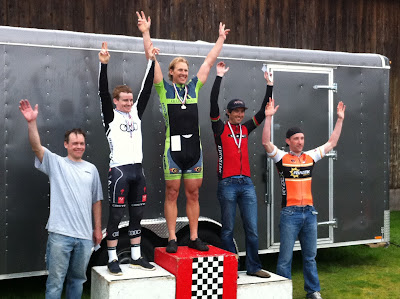 Rich created a small gap on the downhill turns leading to the finishing straight.  We all came back together at the 1km sign, and folks started looking at each other.  Someone jumped again with 300-400 meters to go, and the sprint was on.  I ended up on TH's wheel while he followed someone that caught and passed the first person that jumped, but I missed Ian and Jeff when they shot around us on the left side.  I passed the two guys directly in front of me with enough speed to start closing on Jeff, but I ran out of road before the finish line.

So that's the story of how I got third at the state championship road race.