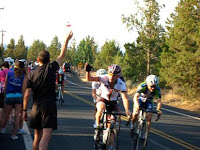 Garage Racing made a strong showing at Masters Nationals in Bend, Oregon last week and are returning with a number of high placings from many hotly contested races. Nearly a full week in Bend gave ample time to earn stars & stripes for the following individuals:
Really though, the team had some impressive results. Time trials: 7th place for Kyle Farrell and John Sindell 11th in the 35-39 group, Robert Powell 20th in 40-44, and Alex Rosenast 25th in 45-49. Crit results had the team mid-pack. I believe we were all saving it for the primes. Post-race we realized that there weren't any primes.

ws, Aaron Berntson took the season overall at Marymoor. The Wednesday night track competition was a Godzilla versus Mothra spectacle up til the last race of the omnium between Aaron and Jim Flynn (Keller-Rohrback). Aaron won the final points race, placing second in the night's omnium to teammate Tom Wick, and taking the overall for the season for Wednesday night. (side note: I'm not sure which one is Godzilla or Mothra...just recycling one of many quotes from the crit announcer at Nationals!)

posted by kfarrell at Thursday, September 08, 2011